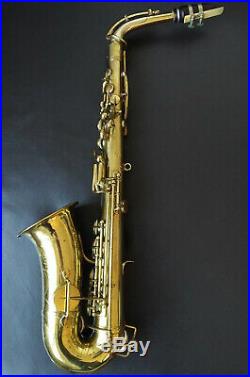 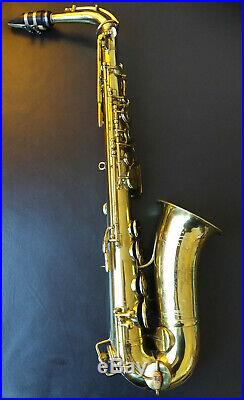 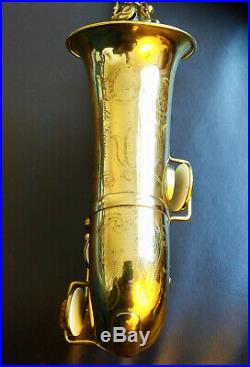 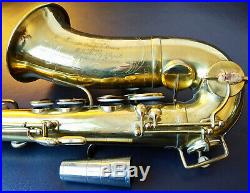 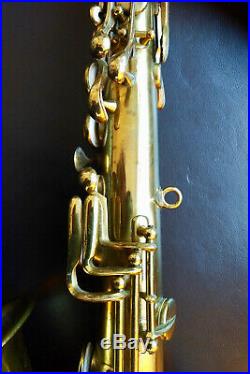 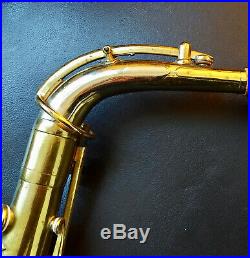 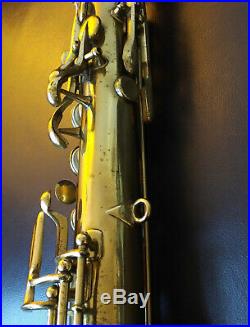 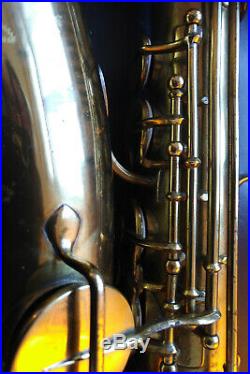 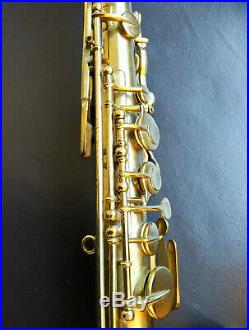 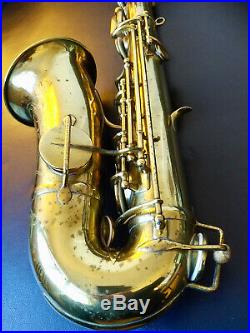 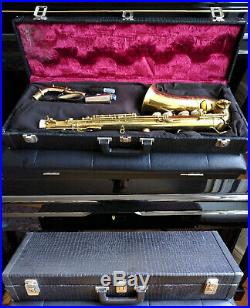 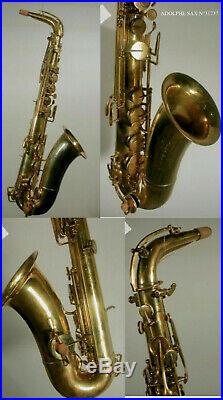 And in great playing condition. This historical MILLEREAU Eb alto saxophone was manufactured between 1872 and 1878 by Francois Millereau, a French instrument maker whose company existed from 1861 to 1931 and was finally bought by Selmer around 1931. It bears the famous "do-mi-sol" engraving with treble clef and is in restored playing condition. It has NO serial number, the age can be determined by the companies address whcih changed after 1878.

It was at some point in its life lacquered and engraved, possibly in the 1950s or 1960s but I have no proof of this. This instrument resembles in detail alto saxophones built by Adolphe Sax in the same time (PATENT from 1866) with the small bell. I attach one photo of an Adolphe Sax Alto for a quick comparison.

This might as well be a prototype or for a musical fair. The saxophone plays beautifully and has a strong pure voice with very good intonation with the wooden large chamber mouthpiece as pictured.

The mechanic features the one improvement over Adolphe Sax design, a coupling in the right hand to enable F#trills and overall is easy to handle. I have played Adolphe Sax saxophones from the same period and find no remarkable difference, these are wonderful instruments! As the common knowledge seems to be that BUFFET were the first manufacturers of Saxophones after ADOLPHE SAX but Millereau seemed to have started with his production line earlier and certainly with an excellent outcome and recognition, forgotten today though.

François Millereau was born in Grosbois en Montagne (Côte d'Or) on 31.3.1831 and died on 10th January 1892 in Paris, two years before Adolphe Sax. Alongside Buffet Crampon, Gautrot and Couesnon, he is one of the most important French saxophone manufacturers in the late The first patent for an improvement of the saxophone after Adolphe Sax 1866 was given in 1866 to him.

Presumably he made saxophones before the company Buffet Crampon. After training and working in Gustave Auguste Besson's studio, he opened his own shop and manufactory from 1861 for brass instruments. A few years later he developed saxophones that were until 1866 under patent protection of Adolphe Sax. On February 15, 1867 Adolphe sued Sax Millerau unsuccessfully for the production of saxophone mouthpieces and saxophone leaves.

This is the first patent for a saxophone after Adolphe Sax. On 7 August 1866, only a few months after the expiry of the original patent, Millereau and Company submitted a patent for an instrument to be called a saxophone Millereau.

Unsurprisingly, Millereau's instrument was similar to Sax's design, except that the two octave keys were mounted on a single post rather than each having its on fixing, although they remained independent rather than interchanging automatically as modern systems do. Another modification, the low C1 and eb1 kegs on a single rod, allows the provision of alternative low C3 key below these. In the same sketch miller added a key between the and the finger touches.

This key does not appear in the other sketches and its possible function is not explained in the patent. (Stephen Cottrell, The Saxophone, pages 68-69). Millereau presents a small change in the distribution of the keys on the saxophone, all of which are closed and opened on top of the instrument. In addition to the saxophone family, the exhibition also features well-known silver and copper brass instruments, all of which are very well made Mr. Millereau won a silver medal. De Pontecoulant, "Music at the World's Fair of 1867", Paris, 1868. (Gallica) François Millereau received in the following years further awards for his craftsmanship: - Gold Medal, Academy of Arts and Manufactures.

Gold Medal, European Institute of Music and Fine Arts (Florence). Special remark: "The alto and soprano saxophones have an exceptionally good sound quality and are perfectly accurately intoned" Source: Théâtre-journal. Musique, littérature, beaux-arts-13.12.1868. (Gallica) The saxophone has white (soft) leather pads and has been worked on in my woodwind store in Berlin toneholes flattened etc. It plays fine on 440 HZ as you can see in the video.

It comes in a customized vintage case from the 1950s. This is quite a rare instrument in this playing condition and collectable for those who are into early saxophone history (and a comparable Adolphe Sax alto is often on the market for 5000 US or more). The saxophone case will be in a larger box and well protected. The item "Unique Historical Millereau Alto Saxophone, first patent after Adolphe Sax 1866" is in sale since Tuesday, January 28, 2020. This item is in the category "Musical Instruments & Gear\Wind & Woodwind\Band & Orchestral\Saxophones".

The seller is "uwesteinmetzdotnet" and is located in Berlin. This item can be shipped worldwide.